Speeding up the fossilizing and time-modification of discards discovered in river and ditch middens, preserved as traces of our current society and culture, combined with word artifacts crafted and altered for museum-ready interpretations drawn from the junk.

The Flotsam of Our Disconnects 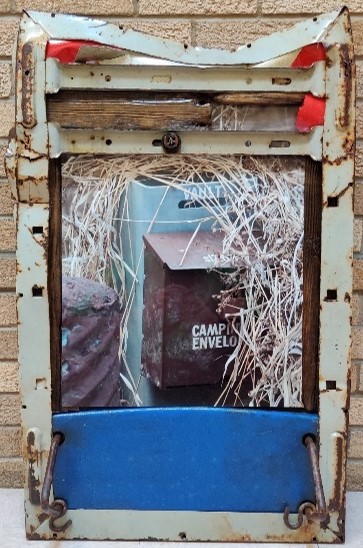 When I arrived at this campground on the shores of the Mississippi River, I saw signs that said: “Island closed to camping.” Only seeing campsites on the mainland, I wasn’t sure what the signs meant. Then I walked across a footbridge and realized there was a whole other campground on the island with 40 or more sites. But all overgrown, inaccessible, abandoned. Turns out that multiple years of flooding along the river made it impossible to keep repairing the campground, so it has been closed, allowing it to slowly be swallowed up by forest and river.
The photograph is of the original campground paybox. It is framed by things found as flotsam from the river. . .a metal framing/cover for some kind of machinery (on a boat?), a swing, driftwood, and reflective tape from a parking barricade.
We are disconnected from climate change, not recognizing it, even as the “flotsam” affects land all around us. 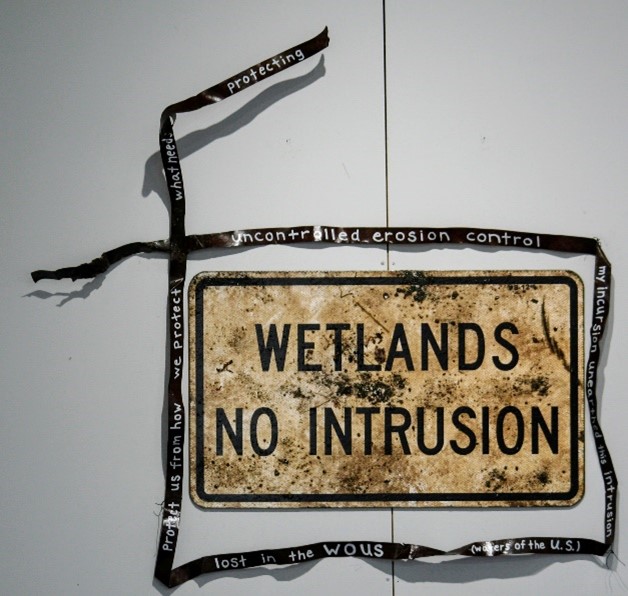 Text reads:
“uncontrolled erosion control”
“lost in the WOUS”  [waters of the U.S.]
“my incursion unearthed this intrusion”
“protect us from how we protect what needs protecting”

I found this construction sign half-buried and nearly in the Des Plaines River. Meant to warn construction workers to keep debris out of the wetlands and river, this sign was inadvertently left behind after a project. I found it long after any construction was happening at the site. The metal strapping was found along the edge of forest preserve. The words are original, aimed at highlighting our competing interests as we attempt to protect our water resources. 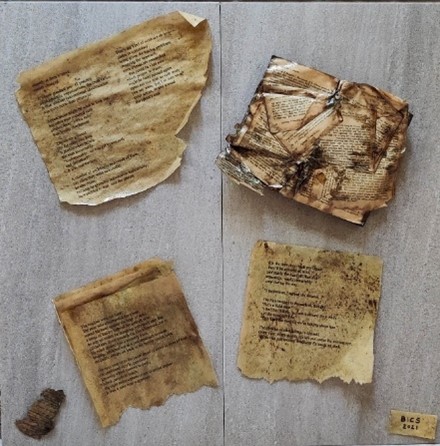 I found this Robert Ludlum novel at a bus stop, pretty much looking like it does . So I poured polyurethane all over it to preserve it. That was the inspiration for the entire “Preserved.” show. I wrote the three poems using only words visible on the Ludlum novel. These are then printed on book endpapers and all coated with polyurethane.

An Ode on a Manure Spreader Paddle 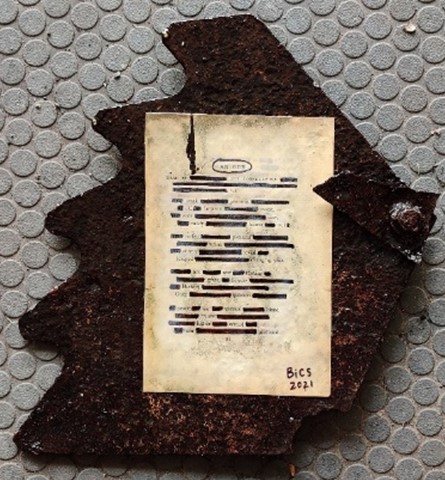 Window Broken into the Past 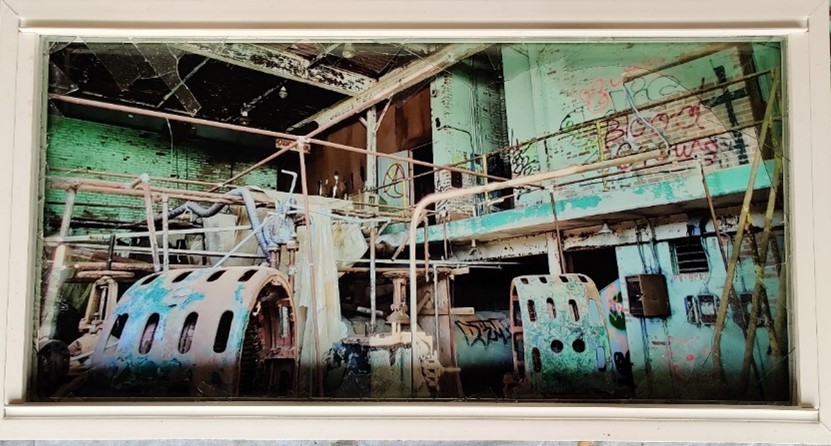 The photograph is looking inside an abandoned power generating station in Will County.
The frame is a broken window found along the side of Highway 41 in Lake County.

Glancing Through the Grate 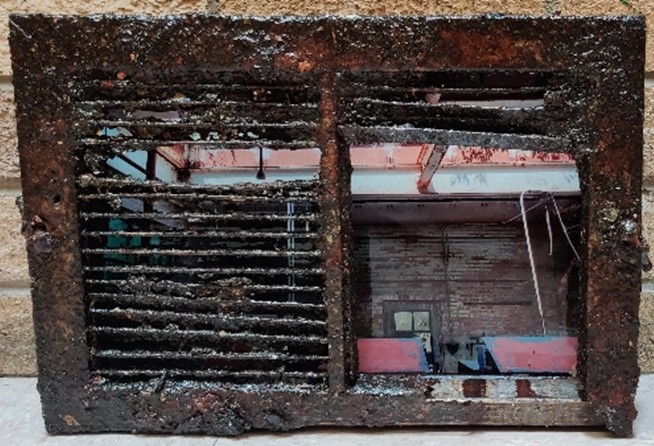 The photograph is from inside an abandoned power generating station in Will County.
The grate/control panel cover was found on site. 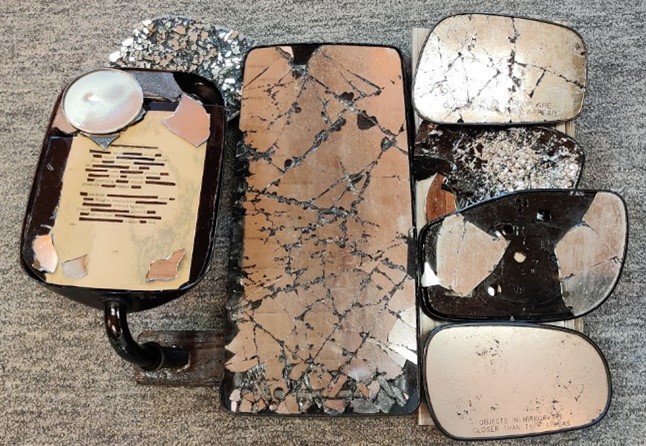 These sideview mirrors were all found in river flats / highway ditches near the Des Plaines River, except for one from a friend to help complete the project. The frame pieces are also found items from ditches. The blackout poem is pulled from a 1905 copy of Chadwick’s Later Poems. 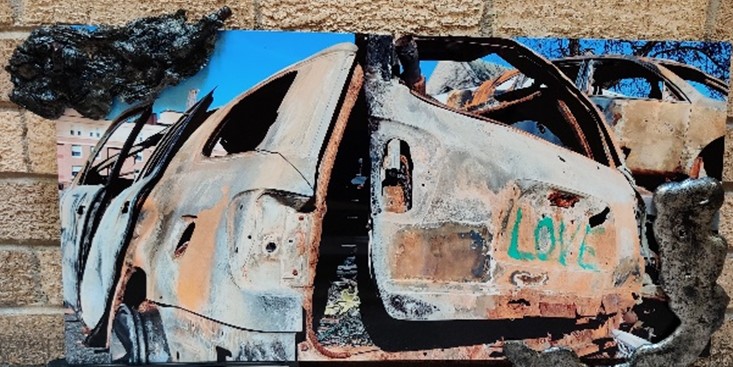 This photograph was taken in November 2020 when the effects of the August 2020 riots were still very much visible in Kenosha. This car lot was completely burned, leaving carcasses of automobiles along with now-solid puddles of molten metal. The response to the shooting of Jacob Blake by police further escalated protests, conversations, and tensions around racism and policing that began in earnest after George Floyd’s murder. Unfortunately, many community members, such as the owner of this car lot, suffered the consequences of these protests and riots. 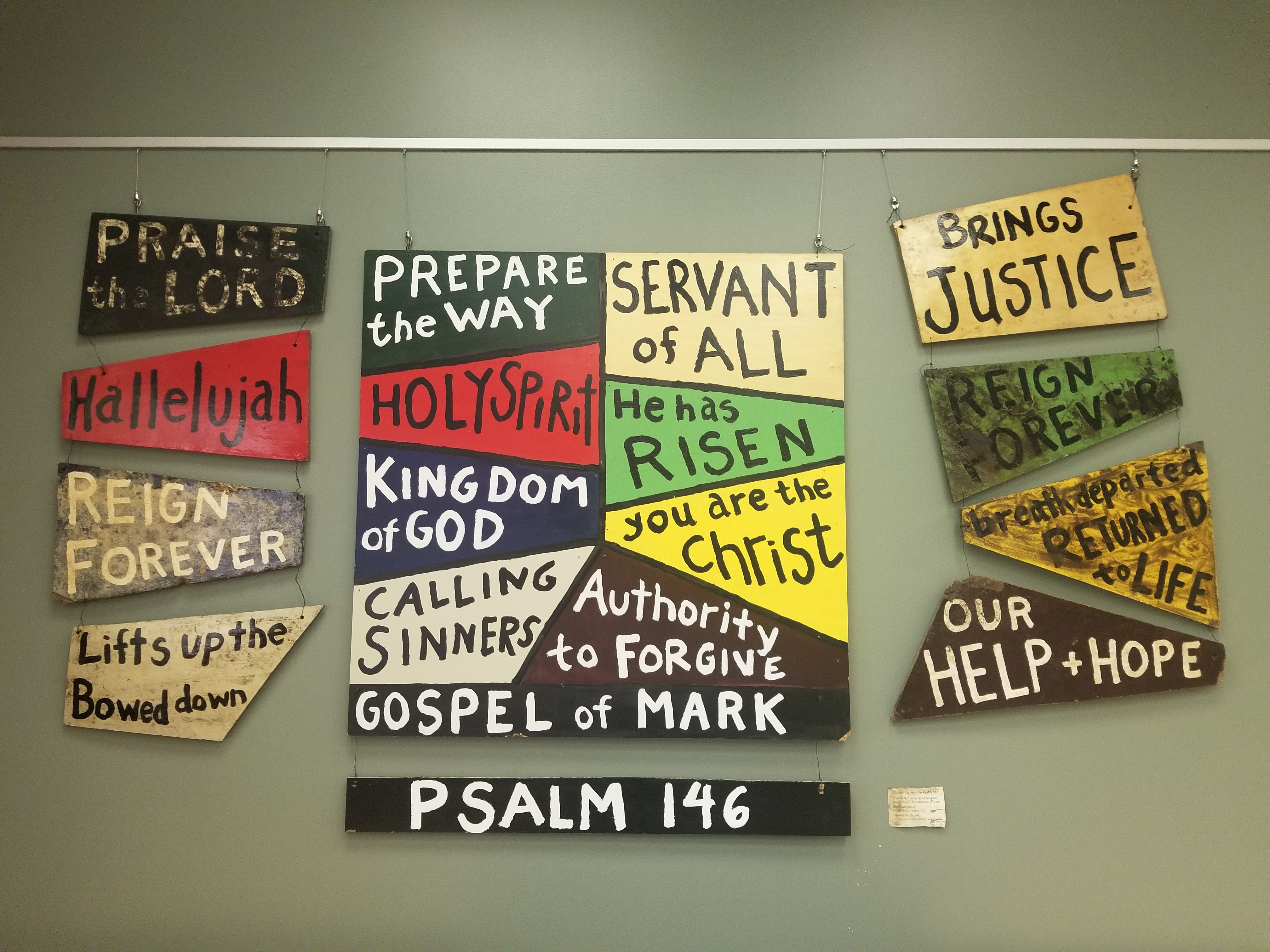 I made this piece originally as a sermon prop on Psalm 146 connecting with the Gospel of Mark. The main piece features phrases drawn from the Gospel. The individual pieces fit on top like a puzzle with words drawn from the Psalm.

In December 2020, I had done a guerilla art installation of a small piece that I put in a creek. Originally to highlight God’s Word at work in the water of baptism, I left the wood piece in the creek for a couple of months before retrieving it.

I liked the outcome of that art installation in water, so I decided to install all 8 pieces from the Psalm 146/Gospel of Mark sermon prop. The pieces were left for around 2 months, tied so as to keep them from drifting away. All 8 were able to be recovered. 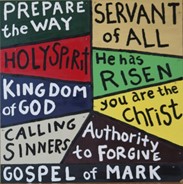 Note: this turn of phrase on the Psalm points to Jesus and His Resurrection. While preaching the sermon on April 24, I realized it was the week of Derek Chauvin’s conviction for the murder of George Floyd. It brought a whole new level of meaning, recognizing that George, a brother in Christ, whose breath was taken from him, has the promise of the resurrection in Jesus.

Lifts up the Bowed down

Images © BiCS Pics. All rights reserved by the artist. 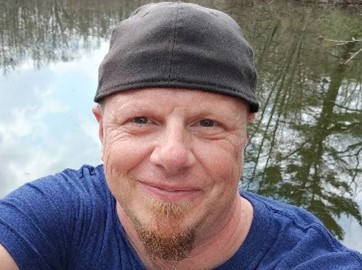 Ben Squires is a photographer, poet, pastor. Not necessarily always in that order. Sometimes connected by dashes rather than separated by commas. He serves at Bethel Lutheran Church, Gurnee IL.

For more information about the artist and to inquire about his work: