These collections contain published and unpublished manuscripts, photographs, and periodicals relevant to the EFCA. The material was digitized at the EFCA Archives in Minneapolis, Minnesota.

Rolfing Library's Digital Collections contains material digitized from the EFCA Archives in Minneapolis, Minnesota and the Gleason Archer Archives in Rolfing Library. Through the links on the collections pages, visitors may browse and download digital material for private use.

The presentation of these collections represents a partnership between Rolfing Library and the EFCA Archives with the goal of making widely available writings, documents, and images considered significant to the growth of the Evangelical Free Church of America and Trinity International University. The scope of the collections cover—among other things—the history, theology, missionary activity, sermons, and development of the EFCA denomination, its predecessors, and institutions.

Users may browse through collections and download works freely. Keep in mind that there may be some restrictions on some items that will require contacting the library or the EFCA Archives for further permission.

This project should be considered ongoing. More material and collections will be added to this site as time and resources allow.

A Collection of texts published and unpublished focused on the EFCA, its history, and its theology.

A magazine meant to give readers spiritual guidance through life's difficulties.

Annual Yearbooks published by the EFCA, listing churches, statistics, and other information.

The official publication of the Norwegian-Danish Evangelical Free Churches published in Norwegian and later in English from the 1890s to 1950. 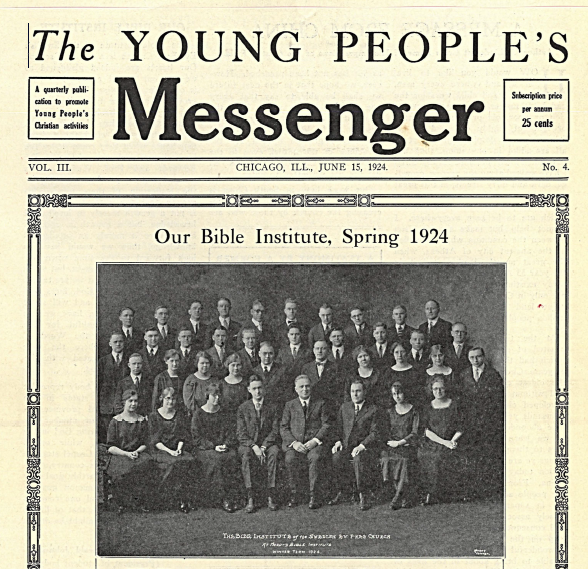 The Young People’s Messenger was a paper for the second generation of Swedish immigrants in our churches who were more fluent in English than their parents who were reading the Chicago-Bladet.  It ran for five years after which it was merged with the Bladet, but it provided significant news, devotional content and letters from the missionaries sent out by the denomination.

The Chicago-Bladet began as a general newspaper for Swedish immigrants in the USA in 1877 published by John Martenson.  As the Free Churches emerged it included more and more news of their people and ministries.  It became the official organ of the Swedish Evangelical Free Church in 1926 and continued publication until 1952.  The paper served a major role in uniting the Free Churches scattered across the country.

The Ministerial Forum was birthed by the Ministerial Association in 1989. The issues addressed varied, though they were issues of current and great significance for pastors, churches, and ministry. It was not connected with the annual Theology Conference, or what had previously been called the Mid-Winter Ministerial. Later, however, it was used as a means of addressing some of the summary teaching of the Theology Conference. The Forum ceased publication in 2013.

Folke-Vennen operated as an evangelical, free (independent), Norwegian language newspaper published in Chicago from 1879 to 1933. It was first published by Rev. J. Z. Torgersen, 1879-1881, and then by W. Mortenson and Company, 1881-1903. It continued publication in 1903 by the Folke-Vennen Publishing Company with Lawrence Crook as proprietor and editor until publication ended in 1933. The office was located originally at 332 W. Indiana Street, Chicago, and later at 332 Grand Avenue (after 1909, became 1319 W. Grand Ave.).

Folke-Vennen served as one of two periodicals that published conference minutes, announcements, news stories, and missionary reports of the Norwegian Evangelical Free Church Association, today the Evangelical Free Church of America, with a national office and archives in Minneapolis. Trinity International University is the academic institution of the EFCA.

While few copies of this publication can be found in libraries today, we are thankful that many were microfilmed by the State Historical Society of Wisconsin from which this collection was digitized.

Missionstidningen was a newspaper of general interest for the Swedish Evangelical Free Church denomination, and published twice each month by Gustaf A. Tornkvist, from 825 20th Ave. N.E., Minneapolis, Minn. In the early years it was published on behalf of the District Conferences in Minnesota, Wisconsin, Iowa and Nebraska. In 1913 it was adopted by the entire denomination as the source of news both within the churches in the USA, its Bible Institute, seminary and academy, and in its worldwide ministry.  This was an era when the Chicago-Bladet was concurrently being published by John Martenson, but the material in Missionstidningen actually became the official organ of the denomination in June 1913, serving in that role until the Chicago-Bladet assumed that role in 1926.  Our EFCA holdings at this point are from July 1909 through the end of 1916. More will be added to this collection as issues become available.

We welcome any and all questions and comments regarding our digital collections.

If you have questions about our digital collections (rights, full-resolution downloads, etc.), would like to set up an appointment to visit the archives for research, or have material that you are considering to donate to the Archer Archives or EFCA Archives, you can contact each institution through:

If the question is regarding the digital collections (e.g. a request for a larger-resolution image, rights, corrections) please make sure to include "Digital Collections" in the subject line of the email.

Rolfing Library's digital collections are hosted through the Consortium of Academic Research Libraries of Illinois (CARLI). CARLI hosts the collections of dozens of institutions and provides a platform for shared knowledge and scholarship across the state. Trinity International University is a Governing Member of CARLI's participating libraries.